Power battery pack is the core component of battery car, which needs to have good sealing performance to isolate the impact of external environment on the battery system, so the sealing test of battery car is particularly important. This time, Harris technology will bring you battery tightness test. I hope our tightness test scheme can inspire you. Here are the details of the scheme.

2、 Common battery car battery sealing is not in place

1. The cracking of the sealing glue between the top cover and the bottom groove results in poor sealing performance, which easily leads to the infiltration of external liquid and pollutes the working environment of the battery.

2. Leakage of safety valve due to sealing problem may cause damage to other parts.

3. The poor sealing results in acid leakage at the terminals, affecting the wires of the battery car and causing the circuit to burn out.

4. The failure of sealing leads to the loss of capacitance and the decrease of battery life and safety.

1. Direct detection is not suitable for the whole battery seal of battery car

2. The battery of battery car is large and has a certain weight, so it is not easy to detect

3. Need to achieve non-destructive testing to avoid substantial damage to the test products

4、 How to deal with the difficulty of battery tightness test of battery car by Harris technology? 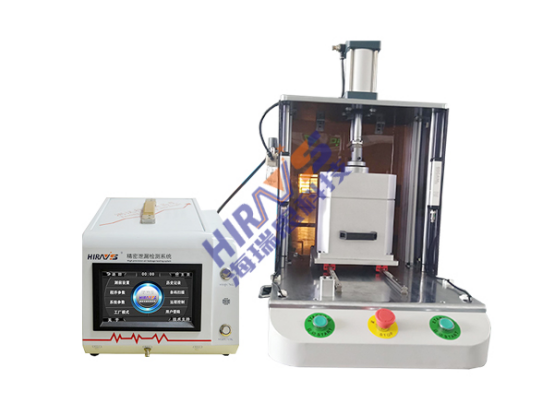 As it is not suitable to conduct direct inspection on the overall sealing of battery car, Harris technology adopts indirect inspection. However, in order to assist the inspection, we need to make corresponding molds and tooling for the inspected products. Mold modeling and product modeling fit, which is divided into upper mold and lower mold. When the upper mold and lower mold are closed, a sealed detection space can be formed, which is conducive to the realization of high-precision sealing detection. The mold is not only used as a container for battery testing, but also as a protective device in the testing. The mold can isolate the influence of the outside world on the battery in the testing, and realize the non-destructive testing.

In addition, the device will fill a certain pressure and volume in the closed cavity of the workpiece, dry the gas without moisture and impurities, then cut off the supply of compressed air, and keep the pressure stable for a period of time. After a given measurement time, it can monitor the tiny change of air pressure in the detection environment. The sensor will send this information to the detection system, and finally through a series of calculations, the leakage value of the gas can be obtained, and the sealing performance and IP waterproof grade of the battery car can be detected according to the leakage value.

Because of the high precision, no damage and low cost of the battery sealing tester, it is loved by the majority of manufacturers.

The copyright of this article belongs to Harris technology. Reproduction and false original are prohibited. Any violation will be responsible for the consequences.